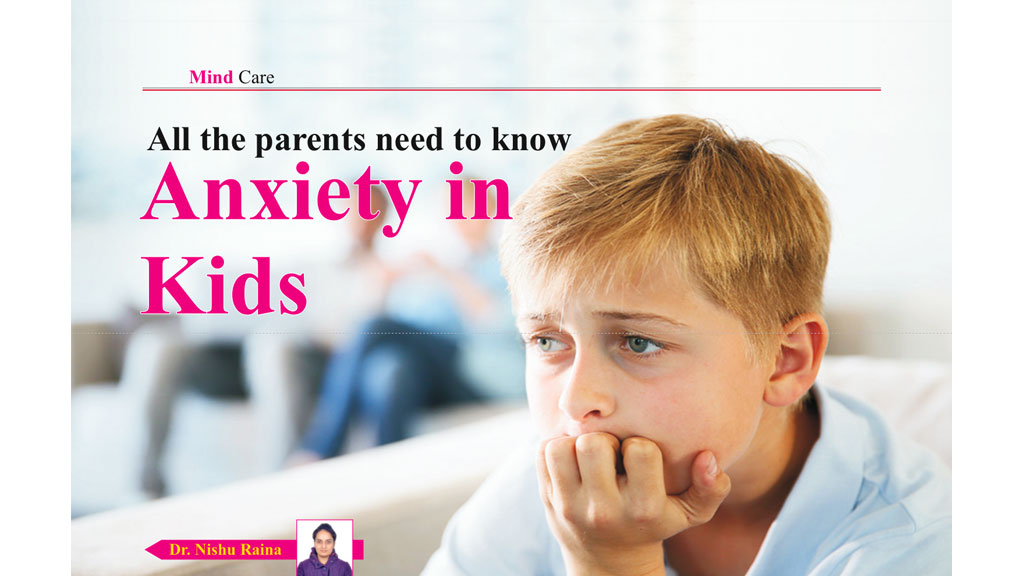 It is normal for a child to feel anxious sometimes before a stage appearance or a sports competition. One might feel distressed whensoever faces a problem at work or just before taking a test or before making an important decision. But anxiety disorders involve more than temporary worry or fear. For a person with an anxiety disorder, the anxiety does not go away and can get worse over time.

It is normal for a child to feel anxious sometimes before a stage appearance or a sports competition. One might feel distressed whensoever faces a problem at work or just before taking a test or before making an important decision. But anxiety disorders involve more than temporary worry or fear. For a person with an anxiety disorder, the anxiety does not go away and can get worse over time. The symptoms can interfere with daily activities such as job performance, school work and relationships. There are several types of anxiety disorders, including generalized anxiety disorder, panic disorder and various phobia-related disorders. Hence some of the prominent symptoms that parents should confront with seriousness include complaints of stomachaches especially before certain tasks such as going to school, withdrawing from social opportunities, performance anxiety, physical distress and not feeling well frequently without any apparent cause as well as troubled sleeping.

It is often incomprehensible for parents to believe that children might have anxiety disorders like adults. A number of times, children complaining of symptoms such as headaches, stomachaches, bed wetting or feeling unwell are brushed aside as being fussy or lazy or their complaints are perceived as deliberate ways of avoiding school or any other task. At other times, their symptoms are perceived as normal pangs of growing up. Unfortunately, many children with anxiety disorders fail to find right medical attention for a long time  resulting in aggravation of their condition. It is important to identify and treat anxiety disorders in children as these have the potential to grow into adult anxiety disorder as well as psychopathologies such as depression, substance use and suicide attempts. Hence it becomes the responsibility of each and every individual specially  parents  that they should not underestimate the below symptoms thinking that this is the normal pang of growing up, instead they should try to seek right medical attention at right time so as to prevent their children to become prone to any type of anxiety disorder and their complications.

Social anxiety disorder can manifest in a range of situations such as the school environment. There is also separation anxiety which is often thought of as something that only children deal with. Children who have separation anxiety disorder have fears about being parted from people to whom they are attached. They have nightmares about being separated from attachment figures or experience physical symptoms when separation occurs or is anticipated. And in the last, one of the rarest anxiety disorder is selective mutism. It is a condition where children fail to speak in specific social situations despite having normal language skills. Selective mutism usually occurs before the age of 5 and is often associated with extreme shyness, fear of social embarrassment, compulsive traits, withdrawal and clinging behaviour.

Anxiety disorders can have a devastating effect on academic performance. If left untreated, these can even lead to
•    Bed wetting
•    Dropping out of child from school
•    Loss of interest in activities they once enjoyed
•    Sudden or radical behaviour changes such as inability to sleep

Impact of Delay in Diagnosis
Anxiety disorders often go undiagnosed in children for years because of their inability to express themselves as well as the vagueness of symptoms. However, it is important to ensure that any such condition is identified early and gets the requisite medical attention. It is important to mention here that anxiety disorders are not the usual pangs of growing up and children will not outgrow them. Yet, when given the right medical and therapeutic attention, children do overcome such conditions and go on to live normal and productive lives. With cognitive behaviour therapy, most of the affected children show favourable outcomes.
Management
1.    Manage the disease conditions like endocrine and cardiopulmonary disorders.
2.    Be attentive regarding social factors like abuse and violence.
3.    Panchkarma therapies.
a.    Internal oleation with maha kalyanak ghrita.
c.    Shirovasti with medicated oils like chandanadi taila.
d.    Shirodhara with  milk, butter milk and medicated oil.
e.    Nasal administration of medicines with brahmi swaras.
f.    Shirolepa with coolant herbs.