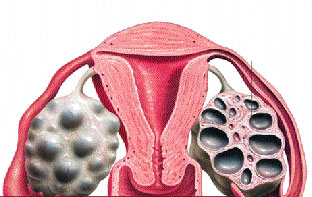 Polycystic ovarian disease is one of the most common gynaecological complaint of the young women who visit the clinicians in the modern era. The hormones that are meant to be naturally released by the body, now provided with artificial means and push the body into lazy mode. The hormone replacement treatment may provide excellent results over a short period but overtime can lead to irreversible metabolic damage. PCOD is the common endocrine disorder among women of 18-45 yrs of age.

Polycystic ovarian disease is one of the most common gynaecological complaint of the young women who visit the clinicians in the modern era. The hormones that are meant to be naturally released by the body, now provided with artificial means and push the body into lazy mode. The hormone replacement treatment may provide excellent results over a short period but overtime can lead to irreversible metabolic damage. PCOD is the common endocrine disorder among women of 18-45 yrs of age.

WHO estimates that it affects about 116 million women worldwide as of 2010. Nature has a potential to cure a lot of ailments through Ayurveda a science of life. Ayurveda is not confined to the healing of disease in a superficial treatment of symptoms instead it evaluates the complete body-mind of the individual. PCOD is such a disease of this high-tech era which can be cured by Ayurveda. I have treated the patients of PCOD with pure ayurvedic formulations who visit MCDAV Hospital, Jalandhar in Gynae (Stri Roga) OPD, even the ones who have been advised surgery by the doctors for the same. The pure Ayurvedic formulations were used in the ancient India and same were given to the patients. The patients visiting OPD complain that they are now fed up with taking the hormones and tired of taking all the artificial drugs for the same. So, keeping in view the sufferings of patient & moreover for their well being, I am presenting a case of PCOD treated with pure ayurvedic formulations. Highly significant results were observed in this case report.

History- PCOD was first described in 1935 by American gynaecologists Irving F. Stein & Michael L. Leventhel. From their names PCOD is referred to as Stein-Leventhel syndrome. Cyst related changes to ovaries were described in 1844.

Synthetic and artificial colourants are used in confectionary, instant desserts, ice-creams, snacks, fast food which are harmful for health and these  are taken in excess by school going girls & college girls so the incidence is increasing in young age group.

Nearly 50% of women with PCOD are overweight or obese. Mood changes are common in PCOD. Prevalence of depression and anxiety among patients with PCOD is higher. Previous studies have identified high rates of depression among women with PCOD. Infertility (unable to conceive) due to PCOD is common disorder affecting 6 to 10% of women. According to Ayurveda, Vata and Kapha vitiating diet and lifestyle are responsible for the incomplete metabolism and hormonal imbalance which ultimately leads to obesity, diabetes and menstrual irregularities and ultimately polycystic ovaries.

Patients of PCOD nowadays visiting in my OPD are not interested in taking artificial means of treatment i.e. hormones. They are facing the side effects like weight gain, bloating, acnes etc. The Ayurvedic formulations used in the treatment of PCOD does not have all the said side effects rather they cure the disease completely. Because obesity is the main contributing factor in PCOD, so efforts to reduce the weight should be done. The lifestyle changes should be adopted for this very step. There is an old saying that, “early to bed and early to rise makes a man healthy, wealthy and wise”.  So, to get rid of obesity early sleeping and early rising is the first and foremost step.

Be alert when you notice following symptoms

•             Shatavari- It helps in promoting normal development of ovarian follicles, regulates menstrual cycle and revitalizes the female reproductive system. It also helps in combating the hyperinsulinemia- i.e. high levels of insulin due to its natural plant based estrogen.

•             Triphala- A mixture of three fruits- Amalaki (Emblica officinalis), Haritaki (Terminalia chebula) and Bibhitaki (Terminalia bellerica)  Triphala, is one of the most popular ayurvedic classical formulations. It is a rich source of vitamin C- a powerful natural antioxidant that helps in reducing inflammation by scavenging free radicals. Triphala helps in cleansing and detoxifying the body system.

•             Guduchi- It is a powerful anti- inflammatory herb. Chronic inflammation in tissues is the root cause for insulin imbalance and ovarian cysts. Guduchi helps in revitalizing all the body tissues and boosts metabolism naturally. It also helps in lowering insulin resistance.

•             Ashoka - Irregular periods are main symptoms of PCOD. This herb regularises the menstrual cycle and also prevents excess bleeding. Its anti-inflammatory property helps to reduce inflammation of pelvic tissues. It reduces lower abdomen cramps which is a common symptom in PCOD.

•             Nagkeshar- It acts as an aphrodisiac and as a haemostatic. Its main action is on the blood capillaries due to its astringent and  cool nature . It helps in controlling the dysfunctional uterine bleeding.

Case Report of PCOD patient Diksha Dutta, having OPD No. 24791/3731 visited Dayanand Ayurvedic Hospital, Jalandhar in Stri Roga (Gynaecology) OPD in December 2016 with the complaints of severe pain in abdomen during periods from the last three months with nausea, vomiting, constipation, backache & foul smelling urine. The periods were irregular. On enquiry, patient told that she had to take injectables during periods to get relief from pain. She usually took the medicine as told by local chemist to get rid of constipation. She went to doctor & on advice, USG was being done & diagnosed as cystic disease of ovary (PCOD) & advised to go for surgery.

Then she came to me & pure ayurvedic treatment was given to her for three months continuously & the Ayurvedic formulations made in DAV Pharmacy Jalandhar were specially used. Do’s & Don’ts were told to the patient and she was relieved from symptoms within one month. On 8/4/2017, USG was done. The report was s/o normal study. The patient was in touch with me for the next two cycles & now she is ok & living life happily.